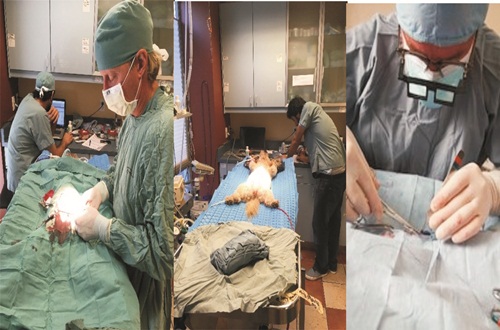 WHAT IS THE ANSWER ?

Spaying is the practice of sterilizing female animals by removing their reproductive organs, including the ovaries, fallopian tubes and uterus.

Neutering is the practice of sterilizing male animals by removing the testes and is also referred to as an orchectomy or castration. The penis is not operated on during this procedure and the outer sac that once held the testes is left in place.

I was driving my babies, I have four dogs, on a good day 7 when they have friends who show up for play dates and one of my gems by the name of Pie – short for Cutie Pie named by her former owner – was going in for a teeth cleaning and a decided spaying at the same time; since she was already going under the anaesthetic, I figured this would be the perfect time go also spay her. To make special mention of her age, Pie is 8 years old and most people would never think of doing this now but I also know that another 10 years minimum of my baby having her period and being hot and bothered and then all of a sudden watching her become the neighborhood whore was just not what dog ownership was about lol! Also, there is no upper age limit on spaying; however, an animal must be healthy enough to successfully make it through the surgery and this can be identified through bloodwork which was done for her and she passed the bill or perfect health! And since I also know that dogs who are not ‘fixed’ are susceptible to ovarian, breast and prostate cancer, wandering, feeling nausea and moody to only name a few, this seemed like the perfect decision at any age!

Knowing all of this, one would think that spaying is the best solution and it is always highly recommended by the veterinarians. and I should definitely have no doubt at this point but regardless, as I was driving to the clinic my heart was racing and I was in tears; I was far more anxious then she was lol. All I could do is ask myself if I was REALLY sure I wanted to do this and my poor baby was going to go into surgery!!! ‘Maybe this was the wrong decision’ I kept thinking and yet that other voice in my head somehow knew that this was the best thing for her!

This is a very stressful decision for most people and of course some nationalities don’t believe in doing this but more and more North Americans know the importance of Spay & Neuter. For years people have been asking themselves whether or not they should spay or neuter their pet. Hopefully this article will help you decide; 10 Reasons to do it or not to do it and here they are:

So let’s explore the reasons why it’s best to spay / neuter your animal:

The tag from animal services is less expensive
The animal becomes more obedient, less distracted and more focused on you.
A female pet will live a longer, healthier life. Spaying helps prevent uterine infections
and breast tumors, which are malignant or cancerous in about 50 percent of dogs and 90% of cats.

Neutering a male pet prevents testicular cancer and some prostate problems.
Improved health outlook, improved temperament.
A reduction in expense caused by breeding in case the female gets pregnant.
A declining homeless pet population : did you know that approximately 7.6 million companion animals enter shelters nationwide every year. Of those, approximately 3.9 million are dogs and 3.4 million are cats. Each year, approximately 2.7 million animals are euthanized (1.2 million dogs and 1.4 million cats).
Breeding dogs that do not have “clearance” from breeding organizations can lead to breed dilution and a much weaker dog with various inbred health conditions. By spaying and neutering dogs that are not the best of the breed we can ensure that healthy breeding lines live on and dogs experience fewer genetic health concerns.
The effect that hormone release has on the behavior of an animal. Males in particular can become extremely dominant or bullheaded as a result of surges in testosterone. These pets can become extremely difficult to control and difficult to train. Hormones also play a role in natural instincts such as marking behavior and shows of dominance and aggression. Spaying and neutering can reduce these types of behaviors and not only make animals easier to manage but also result in far fewer frustrations for the animal.
A single un-spayed cat and her offspring can add over 400,000 cats to the population in seven years and a single un-spayed dog and her pups can add over 67,000 dogs to the population in six years with an average litter size of four.
One of the reasons that many pet owners give for not spaying or neutering their animals is the cost of the surgery. Please know that if cost is an issue for you, there are shelters that will offer you this service at a fraction of the cost so please don’t let that get in the way of making your decision. If you also think that your dog should have babies once in its lifetime; this is not necessarily a good thing for the puppies who are being born especially if it has disabilities, then what? It is also an extremely costly exercise for the owner since the mother needs more vitamins, a higher quality dog food and all the puppies need to be vaccinated at some point, dewormed etc; there are so many other costs come into effect. It is also possible for the birthing female to experience complications that cost her ultimate price: her life. So please re-think this rationally; we already have an over population of humans so we need to stop adding onto these numbers by increasing the breeding of animals!

Did you know that now companies are breeding rabbits, beavers, kangaroos, pigs and cows just to feed our dogs? This is insane what is happening and if these poor animals are being fed to our pets than why wouldn’t people around the world think that it’s okay to feed humans our Pets? It is in my opinion that there should be laws and licenses for breeding and populating this planet from children all the way to our pets! Otherwise we will run out of resources much quicker, leaving a barren planet with minimal water supply. We ALL need to take responsibility for what we do when on Planet earth and Spaying / Neutering is a great way to start!

By the way, Pie recovered and was back up playing and eating and back to her normal self on her second day post operation, I think she knows that she is now free of the side effects and unpleasant behaviours that dogs in heat experience.

I think this is a question of rationality versus emotionality and I think any decision that is based on emotion and not hard true facts is not the right decision. So please consider the importance for both pet, mother Earth and Yourself; that truly the best thing is to Spay/Neuter! WoofJ)