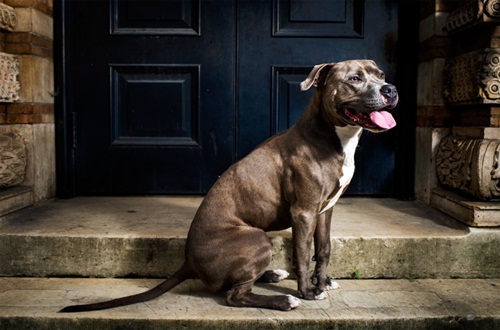 It’s difficult to explain the preternaturally close bond humans share with their canine counterparts. The sense of understanding, loyalty and love we think dogs show us could be all in our imagination, but their boundless lust for life and apparent devotion to their owners has proven to be an irresistible lure for millennia.

In these images, photographer Dina Litovsky draws out what appears to be human characteristics from canine behavior. For her recent shoot for TIME, which accompanies an in depth-feature on the mental lives of dogs, she turned the lens on New York’s Finest.

Rather than go through an agent, Litovsky found her subjects by walking around Tompkins Square Park and Washington Square Park in Manhattan. “Not every [attractive] dog would also be a good subject,” Litovsky tells TIME. “Because some dogs look great to me, but then they wouldn’t sit still or they wouldn’t have much personality for the camera.”

It was important that the dogs be photographed at eye level and given equal status to that of a ‘regular’ human portrait. “You’re trying to make the animal look more expressive and a little monumental, they’re beautiful dogs,” says Litovsky. “Even the very little dogs, I wanted to be looking up at them.” This involved a lot of rolling around in the grass and extended games of catch.

The series is so revealing of the dog’s individual personalities that it seems natural to project complex emotions on a wag of tail or a panting smile. “Nova, the Vizsla was the most regal dog,” says Litovsky. “It was like I was photographing the Queen of England. She was very posed, very regal, very calm.” Isabella, the dinky Pomeranian, was “full of sparkling energy” despite being 14-years-old. Tico, meanwhile, seemed the most intelligent. The four-year-old Pit Bull was “very responsive and very patient” and seemed to understand everything she said.

The owners were equally receptive to having their pets photographed, some of which were minor celebrities in their own right. “A lot of the dogs that I was photographing have Instagram accounts,” says Litovsky. “One of the owners called me the ‘puparazzi’.”