Hi Ronnie, Below are pictures of 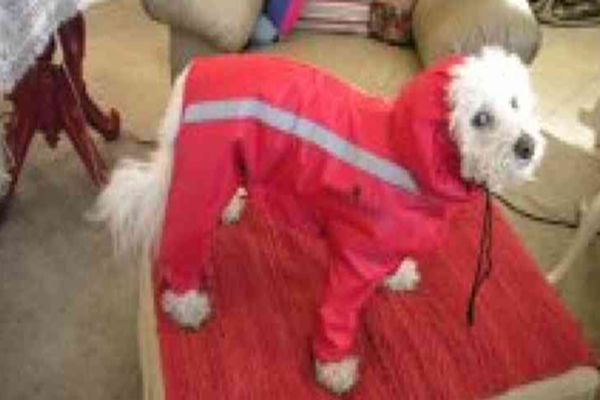 Hi Ronnie, Below are pictures of my Tyler in both is black [Lrg] rainsuit and the red rainsuit [Med]. As I said, he fits in both, a bit more room to spare in the Lrg. Black one and I might have to turn the underside up a little so he doesn’t pee on himself, his little wee wee is covered! However, when he lifts his leg it might pull it enough as not to cause a problem, I haven’t taken him out in the black one yet, we’ll see later. I took him in the red one day before yesterday because it was raining so hard and we just had to go out for his walk. He was none-to-thrilled with his new rainsuit … check out his face! I’m assuming he’ll get used to it in time, but he sort of pretended he couldn’t walk when I got him all into it. He finally walked a little at the dog park but looked like he had hemorrhoids! However, mission accomplished .. he peed & pooped and came back really dry compared to just wearing his raincoat. Thanks so much again for all your help, it’s not the rainsuit, it’s Tyler … he isn’t much for wearing cloths, particularly ones with sleeves … the pants are just one more indignity in his eyes I’m afraid! Merry Christmas, Bonnie Sawyer