Here are some pics of Bogey in his new 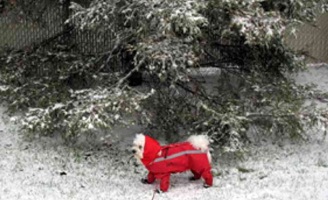 Here are some pics of Bogey in his new rainsuit, hood and boots. It was the second time for the rainsuit but the first for the hood, hence he was not too impressed at the beginning as I imagine it made a bit of a rustling noise that took some getting used to. Once he found a stick, though, all was forgotten! Many thanks for all your support, Starr & Bogey 24 April 08 Snowy Winnipeg