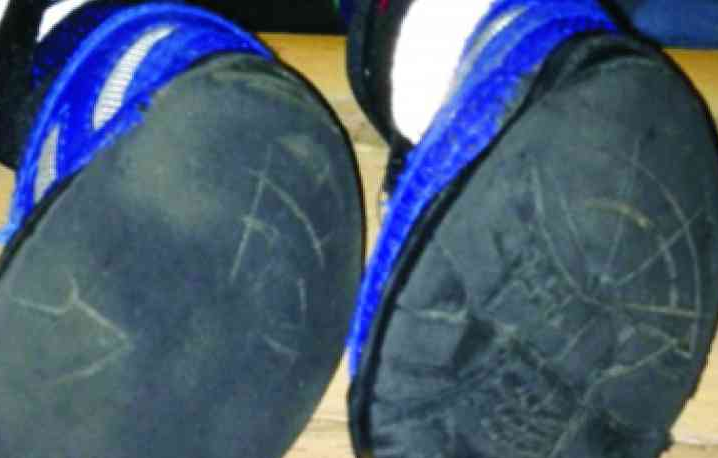 In December of 2005 was asked if I wanted to rescue a pup that was abandoned in a barn in Montana. My first answer was no, but of course I saw a picture and agreed. A few weeks later he was on a plane making his way to me in Cleveland, Ohio. At that time he was a normal pup no issue or birth defects. At about 9 mths in age we noticed his back legs starting to turn out. After xrays we learned his hips never formed right. I knew at that time he was a dog that was going to need a lot of help later in life. Fast forward to the summer of 2012, we were on our normal path in the park system enjoying our walk when I noticed he was kicking is right back leg out like something was stuck in his paw. I bent down to look at his foot and he was actually bleeding due to rubbing a hole in his pad from the way he walks (when he walks his back feet actually twist and pivot and then picks them up). I was devastated for a number of reasons. First, I was a mile or so from the car and at 60lbs there was no way to carry him. Second, his walks he enjoyed so much would come to an end. I felt like the worst dog owner having him walk back with a bad foot. The next day I was talking to my mom not sure what to do. I knew there had to be something for dogs with special needs. The conclusion was they have shoes for the dogs in Alaska for the dog sleds there has to be something for Bear.
I found a company in Florida and worked with them sending shoes back and forth to see what would work. We struck out everywhere. That is when the company recommended I try Neopaws directly in Toronto they were the best and would fit him right the first time. I was skeptical but figured I have been trying for over a month I can’t stop now no matter how defeated I felt about failing to get the walks back. So I sent an email with pictures and measurements. Ronnie said I have the perfect shoe. Well I received the shoes in the mail, probably about a week later, and could have cried. The shoes fit perfectly and he was not trying to kick them off or anything. He looked at me and started walking down the driveway. I quickly ran inside and got the leash. We are now on our second pair of shoes and I can’t imagine his life without them. I mean look at the wear on the soles after one year !! This could have been my dogs’ paws wearing down like this! Absolutely miraculous the difference these shoes have made in our lives!
When Grizzly Bear sees the shoes pulled out he runs over to me sits down and patiently waits for me to put them on. People cannot believe how well he has taken to them and I say he knows the rules you want to walk you have to wear your shoes. So many people laugh when they see him and ask why. When they hear his story they understand this is not a fashion thing it is a necessity to help prolong his active life. Thank You for everything you have done. Kathy and Grizzly Bear – Cleveland, Ohio