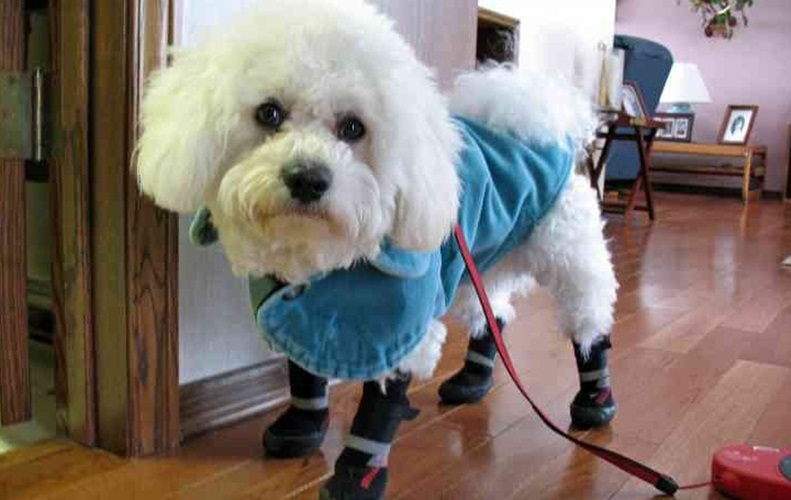 Good Morning! I received my Neopaws boots in the mail yesterday; thanks for the quick service as well as the call to advise me on the proper size of boots for my Bichon Frise. I put the boots on my dog this morning for our walk and it took me a while as I expected after watching the video a couple of times. I know that I’ll get faster at this with practice, so that’s not a concern. Bogey walked a bit strangely in the house with the boots on but once he was outside, that was all forgotten. What I want to brag about is the fact that I didn’t spend my entire walk retrieving boots from the deep snow! These boots stayed on! That was after running down the street covered with lots of sand and salt, through the park breaking through crusty snow, and playing with a large golden retriever. One front boot looked like it might be working loose so I repositioned it once, but that was all. I was concerned about the hair matting on his legs under the boots and so I combed them out as soon as we came inside.

They weren’t as matted as if he’d been wearing fleece booties but I would still recommend that Bichons have a quick comb out on their legs after wearing any boots. Since this morning’s temperature was -25C with the windchill I wasn’t worried about the mud today but spring is coming soon, I hope, and a white dog and muck don’t go together very well. I’m really hoping that my dog’s white feet can stay reasonably clean during our muddy spring, thanks to these boots. I can’t tell you how pleased I am with the Neopaw boots. Now I don’t feel guilty any more about ripping your ad out of a magazine at the Vet’s! I’ll be one of those very satisfied customers who will tell at least 25 people about these great boots. Thanks again, Starr Black Winnipeg